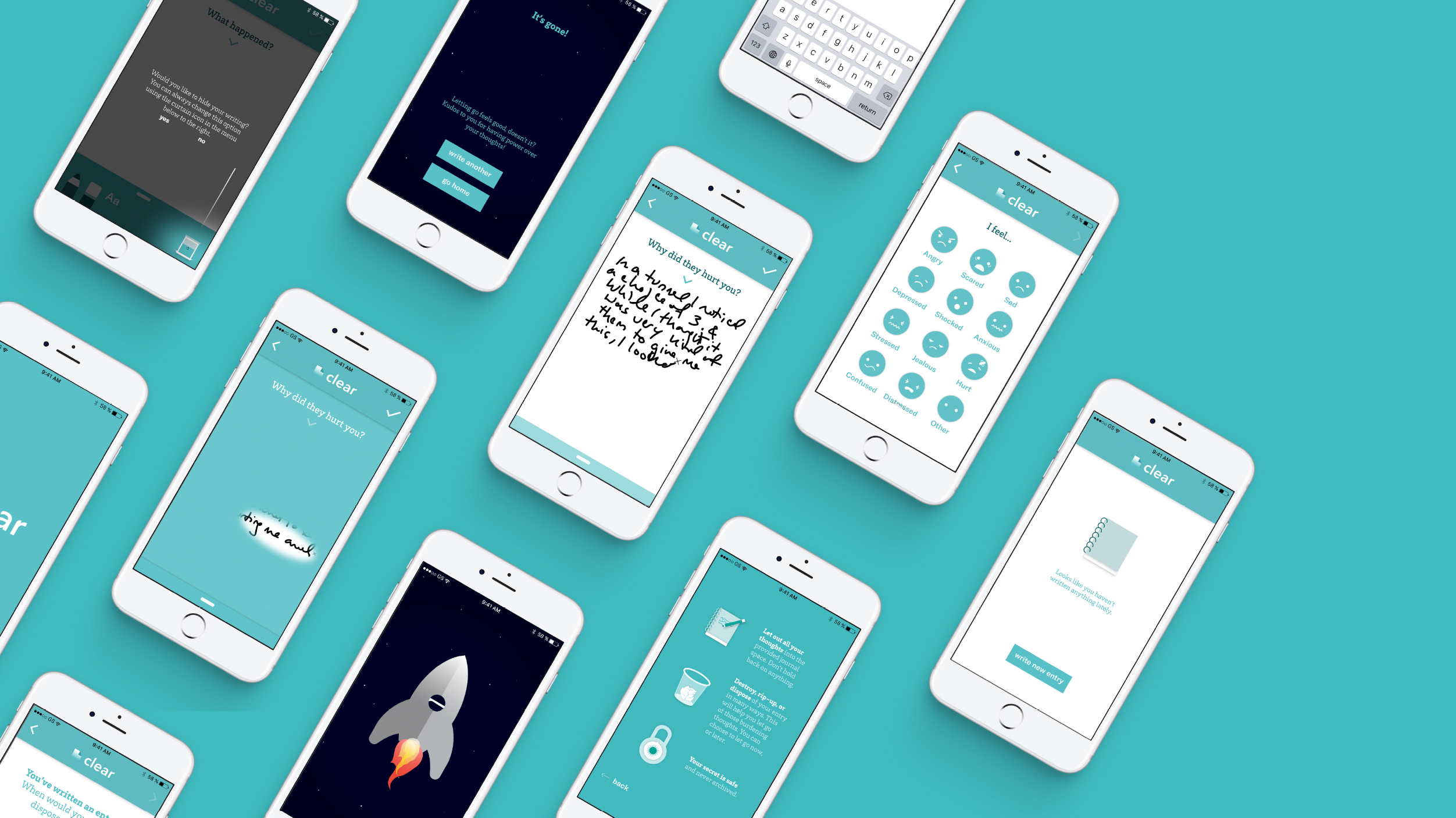 For my Bachelor Thesis, I looked into the topic of social media and studided how it not only affected me as a habitual user, but how it affected my peers online. I began to reflect on our social media behaviour and developed a question: Why we are slowly navigating towards ephemeral messaging (Snapchatting, sending each other Instagram Stories), when we are ironically known as a generation who loves to archive everything (Photos, texts, etc.)? 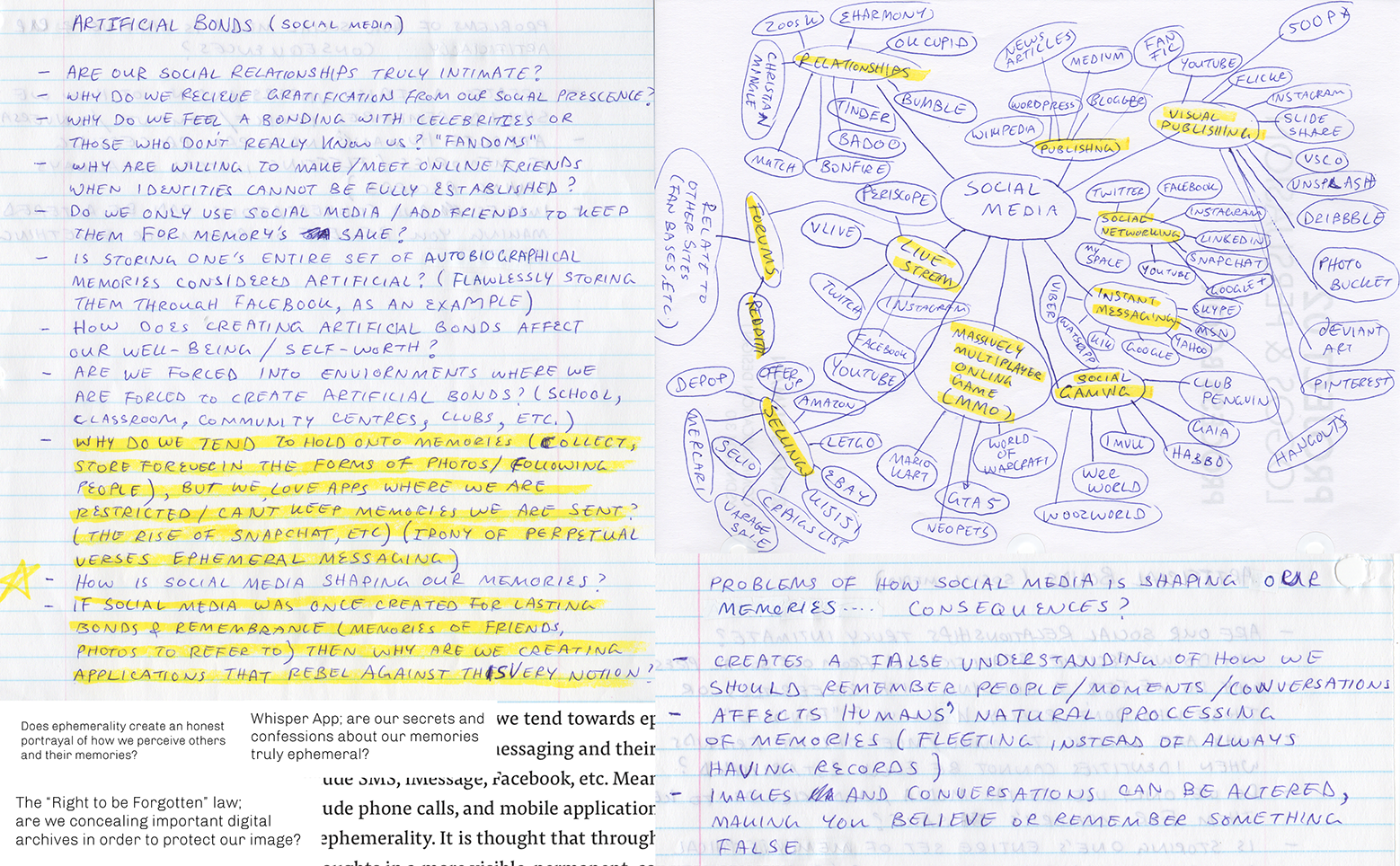 The Psychology Behind Ephemerality

I decided to study the perception of memory archiving in the digital sphere/social media to find out why we are more prone to using methods of ephemerality. Through the beginnings of my research, I looked into the differences between perpetual messaging (Apps that archive digital memories, such as Facebook, Instagram, etc.) and ephemeral messaging (Apps that do not archive digital memories, such as Snapchat, Whisper, etc.)

From secondary research, I learned that ephemeral messaging recreates the natural feeling of conversation or an in-the-moment phenomenon, gives users a sense of control of how their memories are handled (via time restraints, who sees the memory, etc.), and creates an environment for casualness, which leads users to feel “free”, as if their personal thoughts do not leave a digital trail.

From my preliminary research, I started asking questions, such as How do people handle their private memories? and How do people deal with the things they want to forget (when everything in our generation feels so perpetual)?. 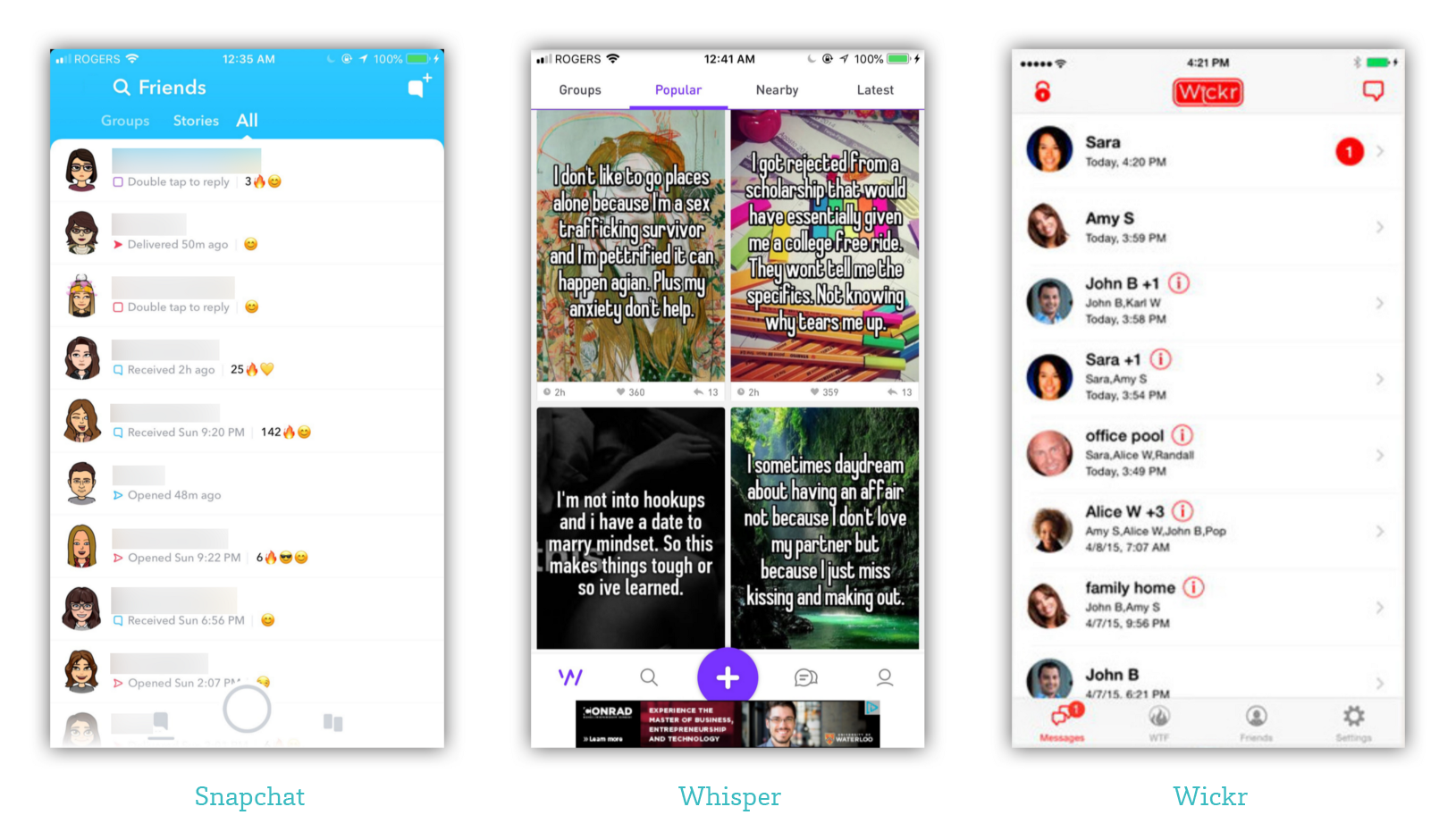 The Link to Psychotherapy

From such questions, I began to reflect on my own personal practice on how I handle my own private memories. I thought of my own past habits when I felt the need to vent about negative thoughts: It helps to write them down on paper, rip it up, and trash it. This felt like an ephemeral space for my thoughts, in that the catharsis came out of ripping up and letting the thoughts “fleet away” by trashing them. This method is known as free-form/release writing: A method used in Cognitive Behavioural Therapy (CBT). Using catharsis, users are able to have power over their thoughts in a kinaesthetic way.

My research lead me to The Quiet Place Project and The Thoughts Room, created by Amitay Tweeto. The Thoughts Room uses release writing in the digital sphere as opposed to using physical objects such as a paper and pen. This website “enables people to spill their emotions without being afraid anyone will judge them about it.” Upon pressing ‘Enter’ on their keyboard, “They can see the thoughts falling down and turning into stars.” (Humphrey, 2012)


Ephemerality is freeing; it uses the destruction of private memories to promote the feeling of casualness, security, and anonymity.

How can we enhance the experience of catharsis using digital ephemerality? 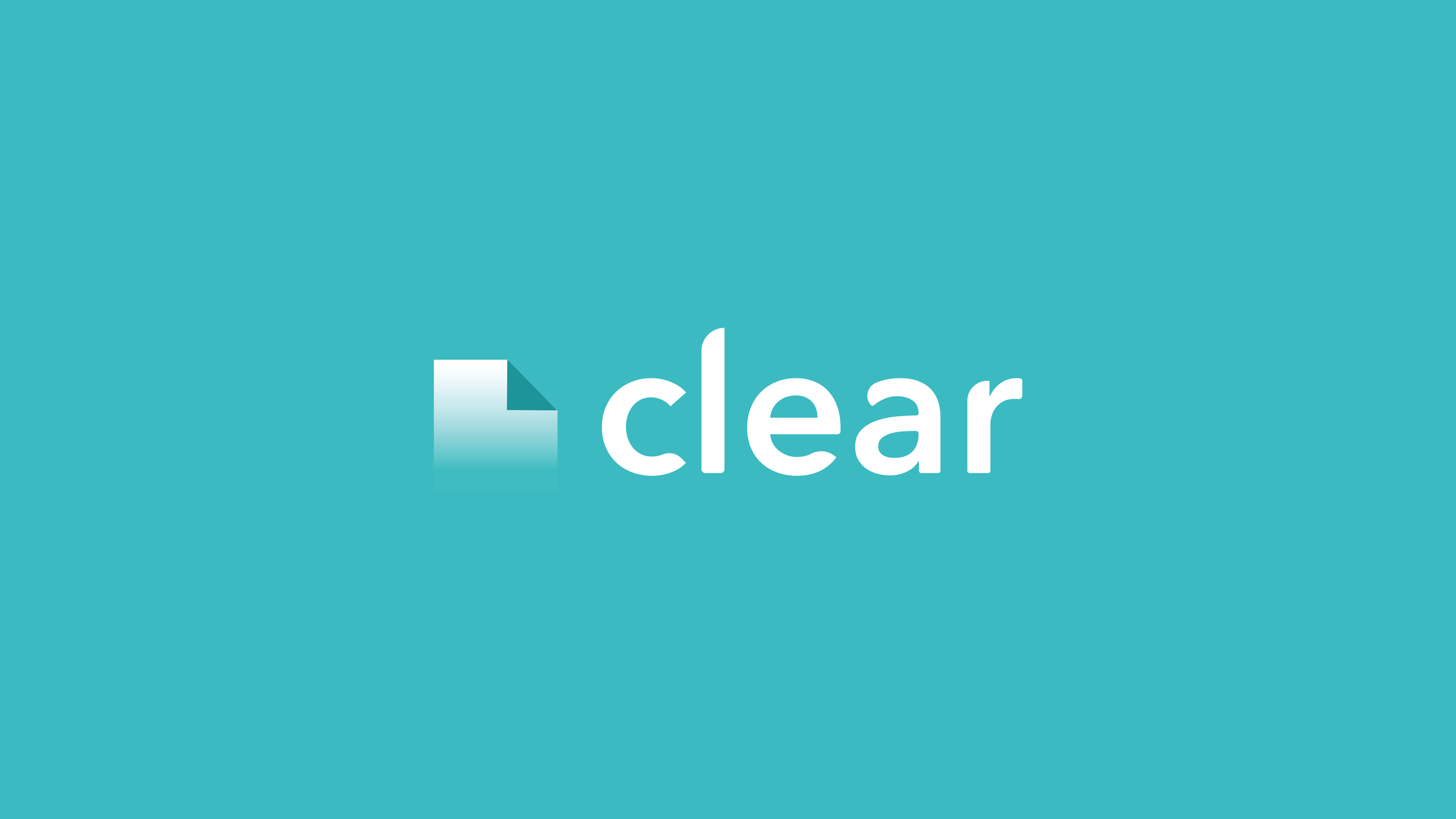 Clear is an ephemeral journaling app, where users can vent their burdening thoughts and destroy their entry afterwards using a variety of different cathartic methods (burning, ripping, shooting, etc.) This app is for anyone who is a mobile user and can benefit from having a place to privately and securely express their thoughts. This application achieves such by allowing users to have total control of their private memories—from the moment they write up until how and when their entry is disposed.

The reasoning behind creating such a mobile application is as follows:

PORTABILITY: Allows mobile users to write on-the-go, if they are ever in the heat of the moment.

INCREASED PRIVACY: Your 'disposed' paper can end up anywhere. Know your entry is never archived on Clear. In addition, privacy screens are added throughout the app to ensure no one can see what you are writing at all times.

ENHANCING CATHARSIS: Clear offers more ways to dispose of your entry. Users can choose from simply watching the paper being thrown out, burning, sent to outerspace, and many more creative options.

EPHEMERAL CONTROL: Users can either choose to dispose of their entries immediately, or in a future time (ephemerally). Clear allows users to let-go of their negative memories whenever they are ready. 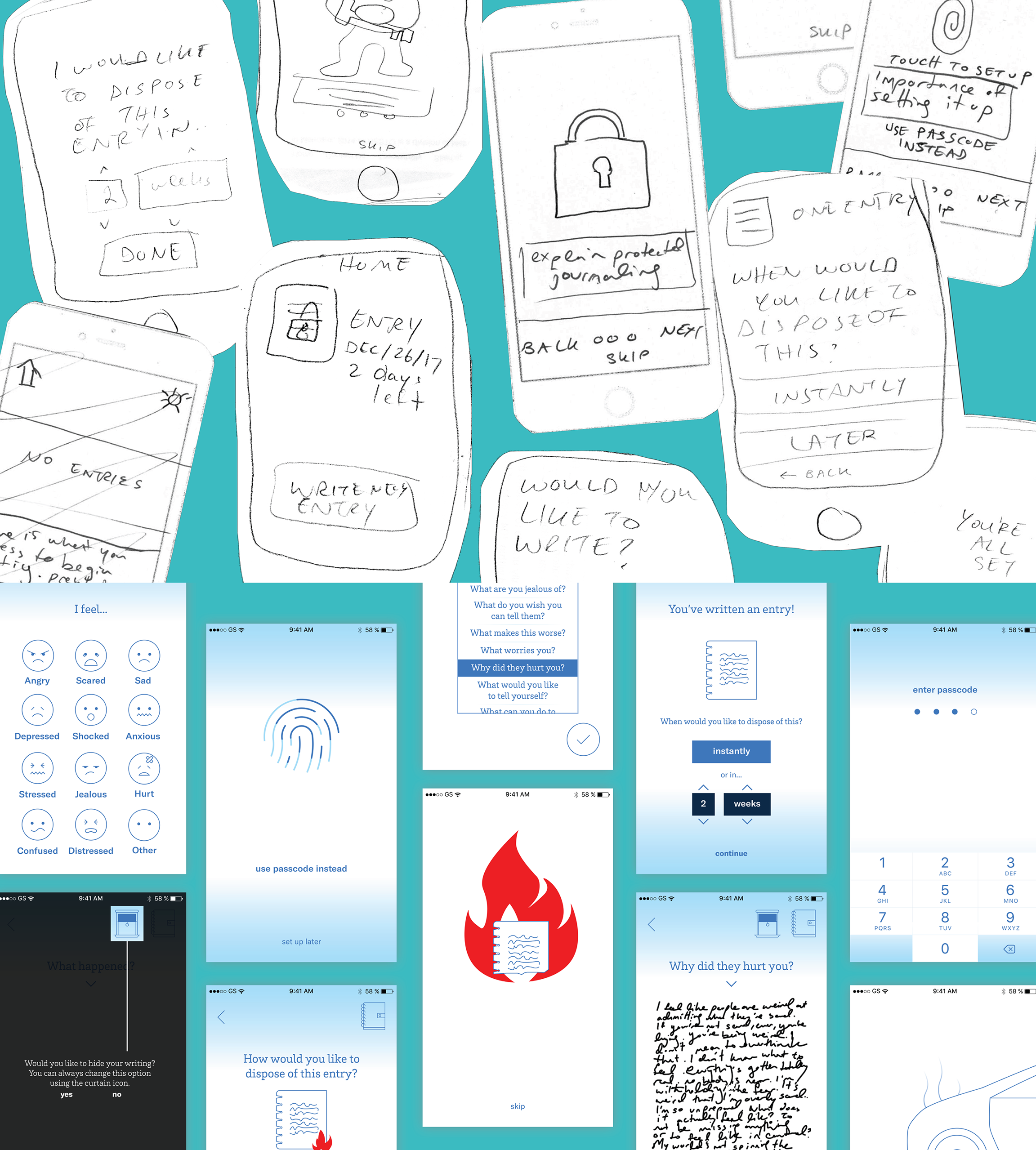 From the process of paper prototyping to creating low fidelity screens, the app was tested with fellow peers. Firstly, the walkthrough process was reduced and more security features were added. For instance, it was crucial to remind users to turn off their wifi so that no other applications would use data from their entries and enforcing the idea that Clear does not archive. Additionally, a privacy screen was added during the journaling process in case users would like to write in public areas and are wary of others reading their entry.

During the app iteration process, it was suggested by testers that the application could include gamification. After users realized that they were rewarded by watching their entry being disposed of in a funny/rewarding method, the idea was scrapped. 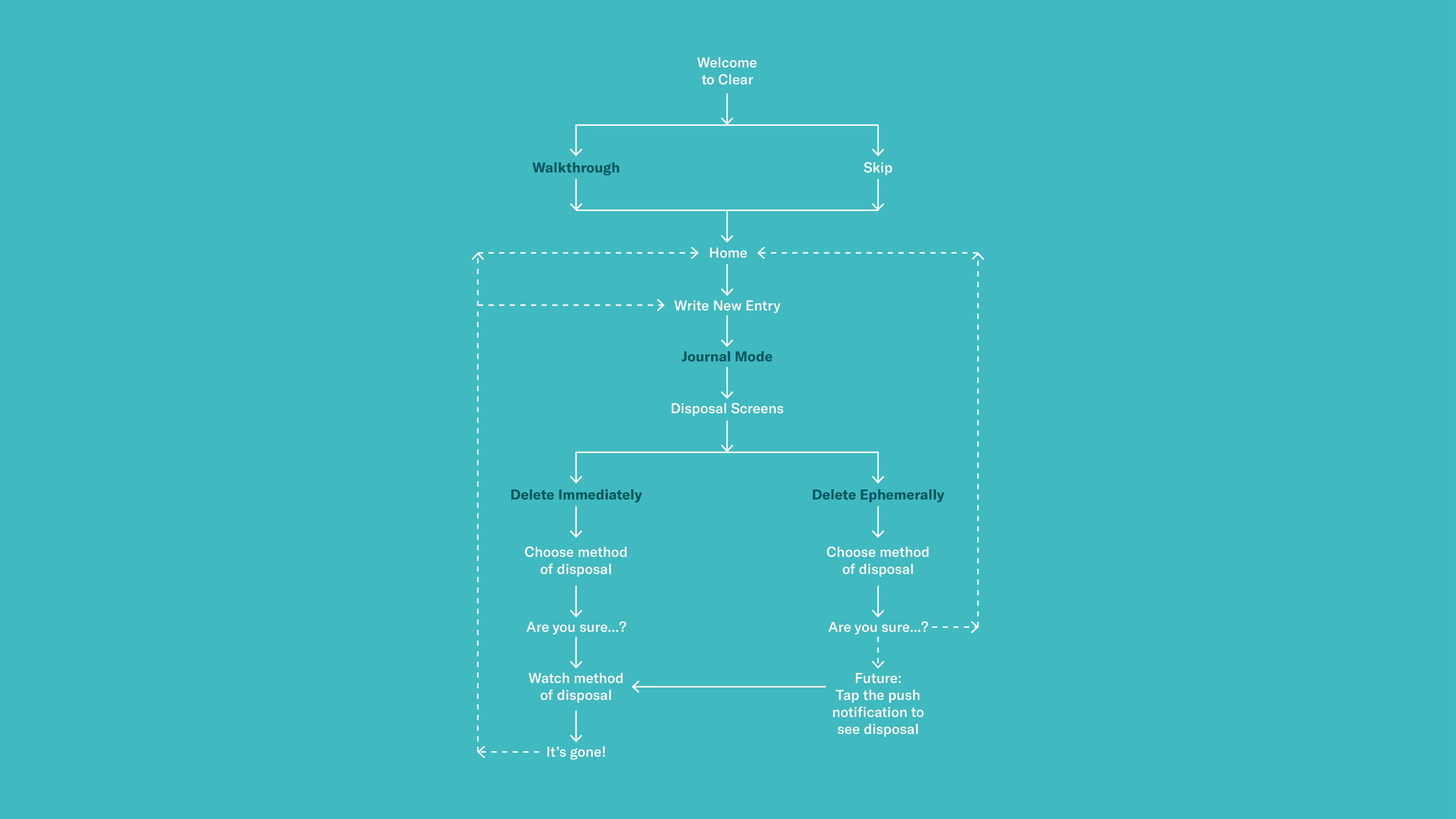 As a first time user, you would be shown the benefits of using Clear and be encouraged to set up either Touch ID technology (for Apple) or set a unique passcode.


Setting Up For Journaling

When journaling, users will be asked to turn off their wifi so other apps would not use the information their are writing in their entries. Additionally, they will be asked to select their mood(s), which helps curate journaling questions.

In the journal space, users can choose to either connect their bluetooth pens to write or draw, or simply use the native keyboard. During the privacy screen option, a white halo on the screen follows your pen movement to show where users can write.

After users write their entry, they have the option of either disposing instantly or ephemerally. After selecting instant disposal, users can then select how they want their entry to be disposed, then watch the animation afterwards.

If users decide to dispose ephemerally, they will specify how long until their entry is disposed. After waiting a certain amount of time, users will be notified to enter the app and watch the animation of their entry being disposed.

During my design proposal, I wanted to create the application not only for mobile, but also for tablets. Tablets would be a more feasible option if users prefer writing with a Bluetooth pen, as it offers more surface area to freely write and draw across the screen. Due to time restrictions, I stuck with designing for mobile, as it is a device most people will have over tablets.